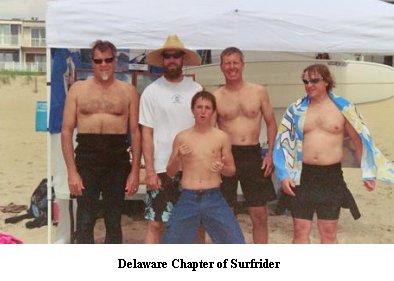 The 6th annual Surfrider Toes on the Nose Team Challenge went off smoothly June 10th at the foot of 37th St in Ocean City, Maryland. Teams arrived at the contest site as early as 6:15 AM for the 9AM start, prepping for a long day of competition and camaraderie by putting up tents alongside the two judging platforms. Fifteen teams entered the competition this year; 3 Surfrider Chapters: New Jersey, DC, and Delaware; 3 clubs: the 62nd St Longboarders, Annapolis Surf Club (entered two teams), and Offshore Longboard Surf Club (OLC) of New Jersey, plus the Christian Surfing Association, some teams with fun loving names like Chicks With Sticks and Belly Blocks, and a number of shop or manufacturer sponsored teams.

By 7:00 am the tents were up, banners were flying, and the surf was crowded with competitors and visitors getting in early sessions. Some of the banners besides Surfrider included the 62nd St Longboarders, Quicksilver, Annapolis Surf Club, Nezzy Surfboards, Wave Trek Surfboards, and TurboTunnel. 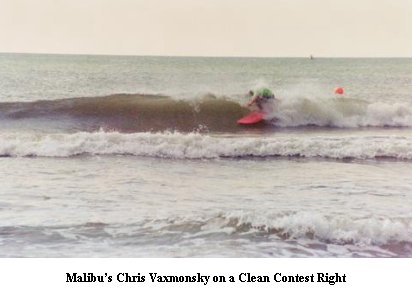 The break at 37th is one of the more popular locations in the area, with a consistently well shaped wave and a shallow sandbar that produces the goods in both big and small surf. The inside rolling whitewater also makes the break popular for beginners and surf schools. Two surf schools are located there during the summer season, plus a third school often shows up nearby. For this contest, the wind was offshore all day, producing waist to chest and occasional head high hollow peaks, with the rights typically being the better option.

The contest format required each team to surf together in one of two adjacent contest areas for half of each heat, then paddle to the other contest area to be judged by a second set of judges. The two teams competing would thus criss-cross between surf areas during a short break. This format eliminated the problems encountered with inconsisten judging scores, plus it also eliminated hassling for waves between differing teams. The result ensured that each team got a chance to enjoy the better sandbar, which flip flopped from one area to the other throughout the various tidal stages. All teams were guaranteed two rounds of surfing before eliminations began; the advancing team was the one with the best-combined score from both sets of judges. 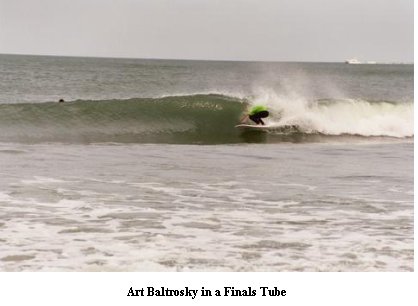 The Semi-Finals in Round 4 featured Ashton going against OLC and Malibuĺs against NJ Surfrider. Both heats saw some great higher scoring rides; with the final round matching Ashton against former champs Malibuĺs, two very strong teams.

First to strike in the finals was Chris McGibbons of Ashton with a quick right tube. This ride was followed immediately by another clean right smoker, almost to the beach by Malibuĺs Chris Vaxmonsky. Each team continued to get quality rides, but it seemed that wherever Ashton team members were surfing, their wave magnet kept working its magic The ride of the finals was a long chest high hollow right that allowed Art Baltrotsky to lock into the tube.. He smoked off a few more hairs on that one. 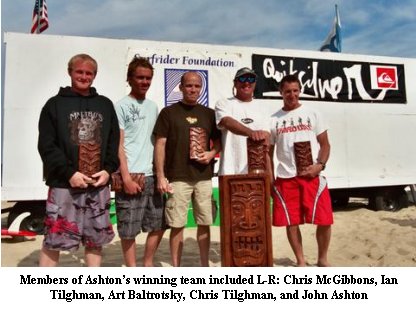