A Short Paper by
Chris Gravell

For many people surfing is not just a sport, but a way of life. Surfing originated in Hawaii, where it was known as the "sport of Kings." "Recent archeological findings suggest that Hawaii was settled around AD 500 . . . and perhaps after a few hundred years of riding Hawaii's waves the uniquely Hawaiian form of the sport was developed. A cautious guess would then set Hawaiian surfing close to 1,000 years old" (Finney pp.23). Surfing was brought to California in 1910. Henry Huntington, trying to get more people to come to Redondo Beach via the Pacific Electric Railway, hired George Freeth, an experienced surfer from Hawaii, to give demonstrations of this ancient Polynesian sport. Surfing moved down the coast from there and came to Huntington Beach in 1920.

Huntington Beach was founded in 1902 by a group of farmers and investors and was originally called "Pacific City." Pacific City didn't really catch on and soon the land was sold to a Los Angeles investment group that included Pacific Electric Railway magnate, Henry E. Huntington. On July 4, 1904 Huntington expanded The Pacific Electric to coastal Orange County and the name was changed from Pacific City to Huntington Beach. The city was incorporated in 1909. In an attempt to draw tourists to the new city, beach facilities and a pier were constructed in 1914. Huntington Beach's economic future was assured in 1920 when oil was discovered near Goldenwest and Clay Streets, just west of downtown. The oil pumps became the symbol of the beachfront of Huntington Beach for many years. As the oil continued to flow Huntington Beach became increasingly dependent on the petroleum industry and the beach recreation business. The building of Pacific Coast Highway in 1926, and, in 1930, the development of 8.5 miles of city and state beaches made Huntington Beach one of the most popular stops for tourists on their way to Mexico. In 1955 the elements of a "surfing culture" began to develop with the founding of "Gordie's Surf Boards," the first surf shop.

Surfing can be said to have its own culture, given the evidence that it has its own language, customs, and style of dress. Nowhere has this been more self-evident that in Huntington Beach. Surf culture has developed since the 1950's to become one of the most recognizable symbols of Huntington Beach. To those people that had the privilege to grow up there, surfing is just an accepted reality, it is not something they think about, but something they feel. The sub-culture of surfing has seen many changes over the years in board design and general attitudes. Surfers have become more politically aware and have shown this with national organizations, such as the Surfrider Foundation, and in Huntington Beach, with their arguments over pier usage with the city. These things all help to contribute to identity if the surf culture in Huntington Beach, a culture that has been a driving force in the city since the mid-fifties.

Huntington Beach is constantly a draw for new surfers. Dr. Bruce Gabrielson credits the pier as being one of the major factors in the development of the surfing culture, because it creates "a quality wave that allows a "central" meeting point for the growth and development of many of the worlds best surfers" (Gabrielson 12/7/99). Huntington Beach has gone through many cosmetic changes, yet the surfing culture has remained a constant and has intertwined itself with the city. Most of these changes have gone on downtown. Downtown used to have forty-seven surf shops, the most notable of which was Jack's Surfboards, which is still located there today, and a collection of small businesses. Major landmarks included the Greyhound Bus Station, The Surf Theater, and the "Golden Bear" Nightclub. Back then, though it was a seedier place that had many drunks and litter on the street and beach, surfers were still drawn to the huge swells of the pier.

Now Huntington Beach has renovated the whole area to become more family oriented. Gone are all of the major landmarks and the small businesses. The only surf shop to remain is Jack's. And even Jack's built an entirely new building to fit in with the new downtown look. In front of Jack's is the Surfing Walk of Fame. The Walk of Fame, which was opened in 1994 honors people in four categories: Surfing Pioneer, Surfing Champion, Surf Culture, and Local hero. Even with the new look, Huntington Beach has managed to keep Main Street and the pier as a place where the surfers can congregate and enjoy some of the best waves in the World. Huntington Beach has tried to attract tourists to the city, while maintaining the surf culture and respecting the quality of surfer that the city produces. Huntington Beach is one place that has respected its surfers and earned the name "Surf City."

There were many people that were instrumental in the establishment of surf culture in Huntington Beach. These people include the August Family, Chuck Linnen (right), Dale Velzy, David Nuuhiwa, George Draper, Bob Bolin, Chuck Dent, and George Farquar, who owned the Huntington Beach News. One of the most influential was Corky Caroll (pictured at left). Corky's name is synonymous with Huntington Beach surfing. Except for a few years in Dana Point, Corky has been surfing in Huntington Beach since the 50's and currently resides there, where he writes article for The Independent, a local newspaper. Corky was one of the first professional surfers and has been inducted into the Surfing Walk of Fame in 1996 as a local hero. 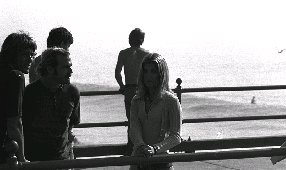 Another huge name in Huntington Beach surf history is Dr. Bruce "The Snake" Gabrielson. The "Huntington Beach Snake" was one of the early surfers in Huntington Beach in the 60's and 70's. He was a member of the Huntington Beach Surfing Association from the early 1960's and served as president of the HBSA from 1967 until he got married and left the club because of time constraints in 1977. He helped organize the "Surfer's Declaration of Independence" during the Great 1970 US Surfboards Championships Controversy. Dr. Gabrielson also founded the Huntington Beach High School (HBHS) Surf Team and is credited as the father of high school competitive surfing. The HBHS surf team is credited as one of the first and foremost high school surfing programs in the nation. This reputation was earned because since their inception through the present, they have competed for the National Championship and won it on many occasions. Dr. Gabrielson, himself, doesn't "think names had much to do with it as the community support itself. There were other places to surf besides the pier in the 50's and early 60's, but when you surfed the pier every one on the pier watched you" (Gabrielson 12/7/99).

Surfing, as a culture, has its own tribes. These tribes manifested themselves in the surf clubs of the 60's and 70's. In the 1960's, a number of surf clubs existed in Huntington Beach. These surf clubs existed to give surfers a chance to participate in competitions and to spread word of their exploits to other members of the surfing community. Of these clubs the most notable is the Huntington Beach Surfing Association (HBSA). HBSA's logo is shown on the right.

The HBSA was responsible for what is referred to as the "Declaration of Independence" for Surfing. These clubs eventually broke up due to a lack of common ground between the old longboarders and the younger "modern surfers. The HBSA officially ended in 1979. In many area of the US, the surfing culture has broken down and many surfers can be anyone, but in places like Huntington Beach, Surfing is too ingrained and taken too seriously for anyone to be a surfer. Here, even though the clubs have left surfing with no discernable hierarchy, the surfers of Huntington Beach still take great pride in who they are and where they are from. Because of this Huntington Beach can be said to have on of the greatest surfing traditions in California. This tradition has been carried over from the club contests to the national contests held annually by the pier.

Contests have always been a part of the surf culture in Huntington Beach. The first US Surfing Championships were held there in the 1950s. After 1960, when these contests were televised, Huntington Beach became known as a surfer's paradise. These contests are a focal point for surfing culture. Contests have always allowed a surfer to showcase his/her talents and are a way for a surfer to gain status inside of the culture.

Much of Huntington Beach's economy centers on surfing and the surf contests that are held there. In 1970 many surfers of Huntington Beach banded together to change, what they felt was, an unjust rule in the US Surfing Championships. This event became known as "The Great 1970 US Surfboard Championships Controversy." The contest was sponsored by the Western Surfing Association (WSA) and was only open to WSA members. Many of the surfers felt that this left out many great surfers, so Dr. Gabrielson, then the president of the HBSA, formed the surfers together and wrote a letter to the WSA and the city in an effort to get the contest changed to an "open" style format. They threatened the city that they wouldn't surf in the contest and they threatened to pull out of the WSA. This move was considered the "Declaration of Independence" for surfers and was able to get the actual competitors more involved in the planning an execution of contests and events.

With more control now being exerted on the contests that they entered, many surfers turned to trying to exert control over the surfing environment. Modern surfing culture has had to go to new lengths to keep the ocean open for recreation. That why the Surfrider Foundation was created in 1984 to help protect the nations beaches and preserve them for future generations. Dr. Gabrielson feels that "Surfrider and Surfing go hand in hand, what is good for Surfrider is good for surfing and vice versa" (Gabrielson 12/7/99).

Surfrider is a political action group that was formed by surfers so that they could get their views across and bring issues of marine pollution before national committees. The Huntington Beach/Long Beach chapter of the Surfrider Foundation has worked for many years to help clean up the beaches and save 930 acres of the Bolsa Chica wetlands. They are working on a plan that will not include putting jetties into the surfline and further disrupting the fragile ecosystem. The Surfrider Foundation represents the best interests of surfers and acts as the national spokes-group for surf culture.

Surfing culture in Huntington Beach has a long and established tradition. It is on the foundations of Ocean tourism and the oil industry that Huntington Beach was founded. The surfers of Huntington Beach are members of a living history. While the culture of surfing can very slightly from region to region, it is a universal culture that has shaped the histories of many cities and regions. Surfers have made themselves known by asserting their beliefs with their sport, as in the 1970's, and the environment, as with the Surfrider Foundation. Surfing culture extends beyond race and age boundaries to bring together people with a common love for aquatic nature and the Hawaiian "sport of Kings." Surfing culture has truly shaped Huntington Beach and the dual fates of both of these entities are forever intertwined and will be played out in the future of Surf City.