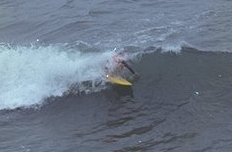 The Physics of Surfing
Erin Grimley

The sport of surfing has been around for hundreds of years. >From the ancient Hawaiians on long, heavy wooden boards to today's surfers on new, light epoxy boards, physics has always played an integral role in this sport. Since waves have not changed over the centuries, the basic physical principles that apply to surfing have remained the same. This consistancy has allowed the surfers of today to harness the power of physics to develop new board designs that produce a faster, more maneuverable ride.

As we all know, we cannot stand on the surface of water, and yet surfers do just that every time they enter the water. This phenomenon is just a basic application of Archimedes' Principle. Using the variables:

Since the surfer and board are floating we know that the sum of the forces on the board is zero:

Since a surfboard is relatively thin, it cannot be submerged too deeply. Therefore, H is approximately equal to h. The first term changes and we find that:

This equation has many implications. It explains why a surfer standing on a board floating on the surface of the water doesn't sink as he does when he is standing on his feet. As he stands on a board the force of his weight is distributed over a greater area decreasing the overall pressure he creates on the water, allowing him to float.

This equation also reveals that the density of the surfboard must be very low. This has been accomplished through the application of physics to design. Old surfboards were made of woods that had a lower density than water so it would float. In order to float the additional mass of the rider, a large area was needed. The resulting board was large, had a considerable mass of its own, and produced a slow ride. New designs incorporate a fiberglass material that has a very low density. Because the fiberglass is porous, it is coated with resin which hardens, creating a water tight outer shell. The resulting board has a low density, a low mass and a smaller area needed to float a rider. Today's smaller, lighter surfboards are faster and more maneuverable.

Balance is one of the keys to surfing. As a beginner, this concept takes a long time, and quite a few spills, to master, but the physics behind it is simple rotational motion. Along the center of a surfboard there is a thin piece of wood, known as a stringer, that runs the entire length of the board. It is only about 1/8" thick but provides strength and, most importantly, weight along the middle of the board. Along the stringer, slightly towards the tail of the board lies the center of gravity. (The center of gravity does not lie at the center of the board due to the additional mass of the skegs at the tail.) This point act as an axis. If all of the rider's weight is too far toward the nose of the board, the board tips forward and the nose sinks; this is known as purling. If, on the other hand, the riders weight is too far towards the tail, the board tips, the tail sinks and the rider takes a swim. The proper position requires the rider to place on foot toward the tail and the other toward the nose, straddling the center of gravity. Because one half of the rider's weight is on either side of the center of gravity, no rotation occurs and the board is balanced. The rider must place his feet placed evenly along the stringer to prevent left to right rotation. Deliberate left to right rotation causes turning, as we will see later.

The rider shown below exibits proper positioning for good balance.

As a surfer attempts to paddle out to where the waves are breaking, he is faced with a dilemma: How does one combat the motion of the opposing waves. A simple maneuver known as a duck dive allows a surfer on his board to move in the opposite direction of the waves motion. The duck dive is based on the same rotational motion principles that were previously introduced in the discussion of balance. As a wave approaches, the rider uses his arms to apply a force to the nose of the board. This force act as a torque and causes rotation to occur. The nose of the board is forced under the water. At this point an additional force is added. The force that the water applies over the area that is submerged holds the nose under water momentarily. Once the wave has passed, the rider removes the force he applies with his hands and the buoyancy force restores the board to the surface.

Catching and Riding a Wave

Now that some of the basics of surfing have become clear, we reach the most essential, and exciting part of the sport, catching and riding waves. In order to do this, we must first understand how a wave works.

Ocean waves, like all other waves, are defined as a traveling disturbances that carries energy from place to place. The energy that is being carried by ocean waves originates in wind or the gravitational forces caused by the sun and the moon. Waves consist of a symmetrical series of crests, which are the high points, and troughs, which are the low points. Ocean waves consist of many water molecules traveling in clockwise circular orbits. The diameter of the orbit is equal to the height of the wave. When the waves are far off shore in deep water, the water molecules are able to travel undisturbed in their circular orbits. As they approach the shore, the water becomes shallow and the bottom of the orbit comes in contact with the ocean floor. The circular orbit becomes elliptical and eventually the weight of the water causes the wave to crash. At this point the particles motion shifts from rotational to translational. The particles' velocity is defined as:

The surfer wants to catch the wave just as it is crashing. At this point, the wave has maximum velocity. We can also see why surfers prefer larger waves. Larger wave have a larger radius and their linear velocity will be greater. Once the wave has broken and begins to travel up the beach the friction caused by the water particles running over the sand slows the wave down. In order to catch the wave the surfers' momentum must be equal to the waves momentum. A surfer accomplishes this by facing his body in the same direction as the waves' motion. He then uses his arms to paddle until his momentum is equal to the waves. At the instance that this occurs, the surfer suddenly feels the board being carried along by the wave. The rider stands and uses balance and the shifting of his body weight to control his direction. 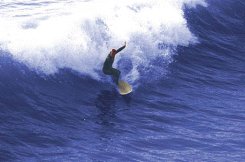