GETTING PHYSICAL
THE PHYSICS BEHIND SURFING

Surfing has been a sport since the times of the ancient Hawaiians. Surfers met and competed against eachother. When the surf was good Hawaiians ended their day of work to ride the waves. If the surf was not good, surfers prayed to the gods, recited chants, gave offerings, and asked surf sorcerers, or kahunas, to enhance the surf so that the sport could be practiced. Stories of the sport were passed down orally from generation to generation until Hawaiian scholars took an interest in the sport. They heard ancient surf stories and witnessed hieroglyphic etchings of people with surfboards and began to study surfing, mainly for historical purposes. As they studied, the scholars began to read into the physics of the sport. They began to define the board design and material and apply these to the type of surf and wave for which the boards were made. As the sport grew, the physics became clearer. The physics behind surfing have always been there. But the understanding of the physics of surfing has become more understood and more applied.

The surfboard was once carved out of very heavy, very low-density wood. The wood most often used was balsa wood. Boards were very long and not very maneuverable. These ancient surfboards evolved into longboards, and were then made out of other, lighter woods, such as plywood. Even though the woods used in earlier boards were low density and could float, a large mass was needed to allow a person to stand on the board and still remain afloat. Therefore the boards were very tall in height, sometimes reaching sixteen feet, and extremely heavy, usually weighing over 120 pounds. Surfers were in search of an easier way. Currently surfers ride shorter, very light boards. These boards are made out of a foam base and glassed with epoxy. This allows for a faster and more maneuverable ride.

Everything that goes into shaping a surfboard has to do with physics. The shape of the board, the shape of the nose and tail, the material, and the glassing has to agree with the laws of physics. Even the rails and the placement of the fin or fins must agree with the rest of the board. The boards pictured below are today's version of longboards in the newer, lighter materials. (Photo of and contributed by Bruce Gabrielson).

THE SCIENCE OF WAVES

Waves are created by wind and gravity. The ocean would be a flat pool of water without waves. No two waves are the same. There are small waves that gently break on the shore and there are waves, such as during a storm, that peak at outstanding heights and crash down on the shore. The greatest wave ever measured by man reached 112 feet high. The measurement was done by personnel on the U.S.S. Rampano in the South Pacific during a severe typhoon on February 7, 1993 (Gardner, 15). Waves begin in a storm area and the size of the wave decrease as they leave that area. As the winds blow, the surface of the water is pushed away from the storm area. Swells are formed from these waves and spread out from the center of the storm.

This illustrates wave energy moving. While the waves move, the surface of the water remains remotely still until the waves break off the shore. The steepness of the wave increases as the swells approach the shoreline. "The wave begins to rise when it enters a depth of water equal to one-half its wave length, that is, the distance between crests (Gardner 15). The wave crests form where the water particles are crowded. The crests of the waves and the troughs (the bottom0 are formed through horizontal displacement. "It [the wave] builds up, crests, walls, peaks, and breaks... with a million variations...They change daily, hourly, by the minute, depending on a myriad of circumstances- wave angle, bottom contour (which changes constantly), wind, current, tide, rips. They all influence surf" (Gardner 15).

Small waves arise mostly from surface tension. The force of gravity mostly causes larger waves with longer wavelengths. The wave's size can depend on other factors as well. Included are the strength of the wind, the wave's duration, and its fetch. Also, precipitation such as hail and rain are factors in the alteration of wave size.

Surfers don't always catch the storm waves. The waves are choppy and have a very short distance between crests. They usually ride shallow water waves. (Bruce Gabrielson pictured below)

Tides are caused by tide-generating forces created by the sun, moon, and earth positions. "A tide-generating force is the resultant force of the attracting force of the moon or sun and the force of inertia (centrifugal force) that results from the orbital movement of the Earth around the common centre of the Earth-Moon or Earth-Sun system" (Britannica vol. 19, 495). Thus, the solar and lunar tidal forces create the tides in the ocean. The surfer follows the tide out to sea in order to get in position for take off to catch a breaking wave.

The current in an ocean is set. That means that the current is very hard to go against. For example, if the current is heading north. A surfer should walk south down the beach and enter the water there. The surfer will undoubtedly be carried with the current. Wind and gravity are the two primary causes of current. They are also the factors that determine the strength and direction of the current. Like waves, the current can be determined by either immediate winds or indirect winds coming from a storm or storm area.

Velocity is a determining factor of acceleration and speed of the wave. The velocity (V) for deep-water waves is half the speed (c). "Group velocity is the velocity of propagation on wave energy. It follows that the wave energy per unit area of the sea surface is proportional to the square of the wave height..." (Britannica vol. 13, 494).

These are the physical aspects of the ocean. The physics of surfing can be applied in many other areas such as floating. Archimedes' Principle is applied to the surfer and the surfboard staying afloat. Using variables and a formula I collected from Erin Grimley's Internet article, the use of physics in flotation can be displayed.

The sum of the forces on the board is equal to zero because both the surfer and the board are floating. H is equal to h because of the thinness of the board. The board cannot pass a certain level of being submerged. Therefore: These variables and formulas were found in "The Physics of Surfing" by Erin A.Grimley (Source Listed) 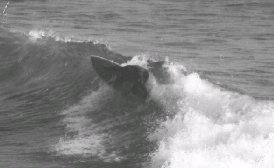 "Centripetal force is the force that gives the board power up the face of the wave immediately after the bottom turn. Torque which is increased by the surfer's momentum down the face, is what supplies the energy to create the centripetal force" (Bruce Gabrielson).

The sport of surfing is a small world of physics in its own. Everything, from the ocean, to the board, to the stance of the surfer, to the solar, lunar, and centripetal forces determine the sport. A surfer is interacting with physics every time he watches a wave crash and enters the water.